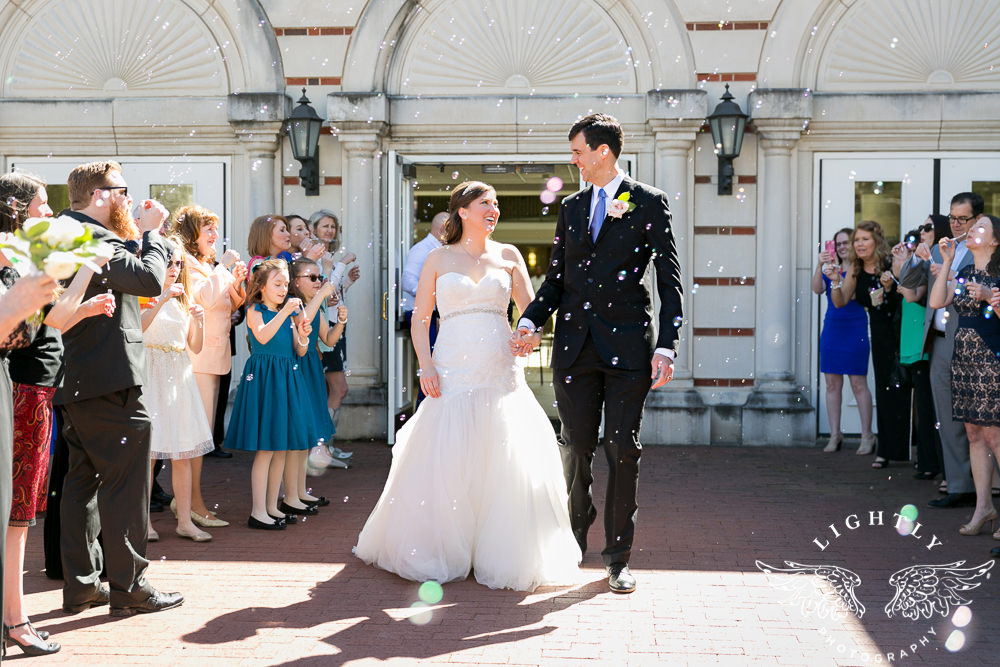 Laura and Ron might be the sweetest people you ever meet.  Both of them are very committed to their church and met at Bible Study where Laura played the piano but never talked.   They reconnected years later at a “Friendsgiving” at Watermark and have been together ever since!

They had a morning wedding with a small lunch reception at their church because Laura has always wanted a daytime ceremony.  They plan on having a big party for all of their family and friends in June, which is sure to be a blast!  Everything about their wedding day was so thoughtfully planned out and everything had meaning behind it that referred to them as a couple and the day that Ron proposed.

“He picked me up with a red carpet outside his car (which he does for special occasions) and we went to the coffee shop where we went on our first date. He chugged his hot chocolate, and as soon as I took my last sip he asked for the check and we left for dinner at Sevy’s. We drove around Preston Center after and looked at lights, then stopped in Park Cities Baptist Church to see the lights in the sanctuary. The security guard told us to hurry because they were wrapping things up. When we walked into the sanctuary, all the Christmas lights were off and he was disappointed/frustrated. We sat down in a pew and he said he had been working on something and was wondering if he could practice with me. He turned to me, and all of the Christmas lights came on (ahhhhhhhh — that’s the angels singing!), and it couldn’t have been better timing. He recited Proverbs 31 – the passage about a wife of noble character. When he finished, gave me a card that said “On the 10th day of Christmas, my true love gave to me…see the box”. He shimmied as best he could to get down on one knee, even though he had a walking boot on his left foot and a splint on his right ankle. He asked me to be his wife, and I said yes! He pulled out the ring box and I opened it, and the rest is history :)”

They chose to have their first look in the Sanctuary, even though their ceremony would be in the chapel because that is where Ron proposed.  It was a beautiful moment and when they had finished talking, they walked straight to the front of the sanctuary, sat in the front pew and prayed together.  Seriously, so sweet.

It was then time for the ceremony.  I started to tear up as I listened to the officiant talk about their relationship and how blessed they were to find each other and not giving up on the standards they held.  So many beautiful things were said about these two and the marriage they were going to build together.  How could you not shed a tear?

After they said their vows they were pronounced husband and wife and everyone made their way to the reception hall.  When you hear that Babe’s is catering lunch then you’re glad you don’t have to drive to the reception venue!  Laura and Ron entered their reception to the Chicago Bull’s song and had their first dance on the landing of the staircase where everyone could see.  Their cakes were totally them and my favorite was the Chick-fil-a cake that said “I love you more than chicken nuggets” because that is true love right there.  As the reception came to a close, a limousine pulled up outside of the church with a red carpet rolled out to the door.  You can’t have a red carpet on the first date, and not have it at your wedding!  Laura and Ron said goodbye to their friends and family as they made their way through clouds of bubbles and were sent off to enjoy their honeymoon!

I am so grateful to have met this wonderful couple and that I had the opportunity to document their special day.  I cannot wait to celebrate with them some more when they hold their party in June!

Saturdays are perfect for sleeping in, sipping cof

A huge part of what makes a wedding day special is

How dreamy is this moment? ⁠ ⁠ We love when co

Did you know that when it comes to your wedding, Y